Sanjay Leela Bhansali directs Ranveer Singh, Deepika Padukone and Priyanka Chopra in his long gestating magnum opus Bajirao Mastani based on the fabled romance of Bajirao Peshwa the great Maratha warrior and Mastani Bai the warrior princess of Bundelkhand. SLB is a master of star crossed lovers and breath-taking visuals that are second to none. It is no secret that SLB has likened Bajirao as a seminal tribute to the greatest Indian movie Mughl-e-Azam, a comparison that few would dare to want to draw to their own movies lest it fall short of the ShahJehan and Anarkali romance that shook the foundations of the Mughal dynasty.

Bajirao Mastani is stunning exercise in visual mastery that one has come to expect from SLB. While earlier Bhansali has relied primarily on enormous sets with ostentatious production values here he goes more for the panoramic shots of the horizon upon which many a battles erupt and end rather violently but the faint pinkish hue of the sky somehow applies a calming touch to the bloodshed. There is a shot where Bajirao mounts an attack on the Mughal king attacking Bundelkhand which has featured prominently in the trailers as well that shot is worthy of a LOTR comparison in terms of the fight choreography and the scene composition. There are many a visual cues that evoke a 300 or LOTR like vibe but not because they are replicated like in those Hollywood movies but more so because of the cleanness and the competence of the craft involved.

But war is not what Bhansali specialises in – Romance is where the auteur’s signature touch comes through. The main characters are introduced in such a casual fashion that it is clear that in Bhansali’s universe the story comes first and its stars later.

Speaking of its stars there are clear stand outs. Ranveer is fantastic once again as Bajirao Peshwa – the sword of the Maratha Empire that at once threatened to overthrow both the British and the Mughal invaders from India. Ranveer manages to strike a respectable restraint when portraying the poignant Maratha warrior and does not render him as a caricature but rather as someone worthy of the awe that surrounds him. Deepika as Mastani continues her winning streak with her ability to get to the essence of each of her characters and to pull each one off with an exquisite elegance. Madhubala she is not but the grace and poise with which she carries herself in royal courts is brilliantly juxtaposed by the fierce warrior that she is on the field. Deepika either has some magical powers or all the cinematographers she works with love her and are able to light her in ways that not even the most famed beauties have ever been shot as. There is a luminosity to her which seems to emanate from within her rather than from the outside. Priyanka Chopra as Kashibai, Bajirao’s first wife is also wonderfully restrained. She carries her proud self while still letting slip her vulnerability in moments when she confronts Bajirao after he marries Mastani. While Deepika’s gestures are more languid and lyrical befitting a Muslim princess, those of Priyanka are more energetic and exaggerated as one would expect the women of Maharashtra to embody. Their dance off in Pinga is SLB’s directional nuances at his best. Priyanka wears a silk blouse while Deepika wears a velvet one, Deepika holds her head high while Priyanka bobs hers enthusiastically, Deepika arches her back yet manages to look long and lean while Priyanka goes in for the more energetic hip action. Both similar yet strikingly different. This is why when people complain that Bhansali goes for mostly ostentatious sets they seem to miss the minute details that he puts in to etching out his characters. Milind Soman as Pant Pradhan to Peshwa and Tanvi Azmi as Peshwa’s mother are important characters in the story and the choice of the actors couldn’t be any better. Milind Soman is rather unrecognizable yet entirely impressive.

No Bhansali movie is complete without a smashing sound track with memorable songs and tunes that linger on in your head long after you have left the theatre. And Bajirao Mastani is no different. Deewani Mastani is without a doubt the most visually stunning song, Pinga evokes a Dola Re déjà vu and has a catchy hook. Albela Sajan seems to be a straight lift from Hum Dil De Chuke Sanam but with the reworked music works well. The only sore spot is the Malhari song, that song has no place in the final cut of the movie it should have been left on the chopping floors.

Camera work by cinematographer Sudeep Chaterjee is beautiful. The scenes with Priyanka coming forth with the Aarti to welcome Bajirao, the slicing of the peacock feather and the dagger thrown at Chimmaji Appa are particularly captivating but it is the entire sequence in the Aaina mahal during Deewani Mastani and the triple jump and slash scene in the battle field are so good that they will become the hallmarks against which future cinematic references will be made.

The story and particularly the climax evokes strong Devdas vibes, The nods to Mughl-e-Azam are more than a few the Holi Song is Mohe Panghat pe, The jailing of Mastani is Utho hamara salam le lo. But despite these minor flaws this is a stunning piece of cinema and without a doubt the best I have seen this year coming out of Bollywood.

Watch this for Bhansali who for me is the best director working in Bollywood today who delivers with a consistency, a visionary who makes going to cinema worth it. Watch it for Ranveer who continues to defy expectations and delivers a performance that is equal parts abandon and equal parts restraint. Watch it for Priyanka who shines like a finely cut diamond in the hands of the master craftsman. And watch it for Deepika Padukone who continues to defy the law of averages and keeps getting better with each movie and is at present peer-less in Bollywood and the queen continues to reign supreme as the warrior princess.

Imtiaz Ali directs Ranbir Kapoor and Deepika Padukone in Tamasha, in a love story that promises to be unlike other love stories. Bold aspirations indeed, seeing how Imtiaz has directed Ranbir in the angst filled Rockstar, Ranbir has played the rebel with a cause, the one who goes against the grain, Also Deepika has played the counterbalance to Ranbir in a fair few times. But therein lies the magic. You take ingredients that have worked on some level or the other and you refine them over the course of time and what you get is a concoctions that has the sparks of magic flying through it.

To dissect Tamasha into its four acts is simple but look a little deeper and you can see what each of those acts represent. Human life is divided into 4 stages or Ashrams, Bramhacharaya Ashram, Grihasta Ashram, Vanprasta Ashram and Sanyasa Ashram. Each of the Ashrams represent a central pursuit or struggle. 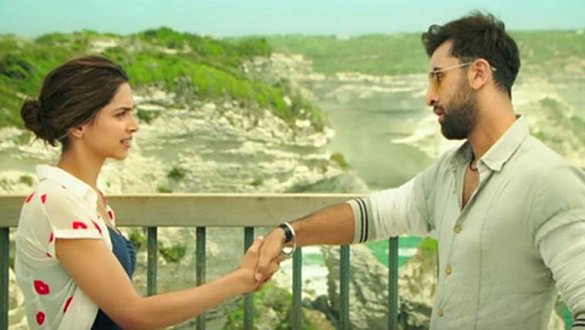 Teja ka Sona is Ranbir living out his Bramhacharaya Ashram – we meet the young Ranbir who admittedly is rubbish at maths but loves spending his time listening to stories from an old man who sits under a tree in Shimla. We see him grow up and meet Deepika Padukone in Corsica where they decide to not exchange identities and instead live out their days together feigning different Bollywood stereotypes while slowly falling for each other. They agree that what happens in Corsica stays in Corsica. Here Imtiaz also takes us on a Richard Linklater style Before Sunrise journey where two strangers meet but where Ethan Hawke and Judy Delpy had the power of words here a lot more is said in the moments where not a word is spoken.

A few years pass and we enter Grihasta Ashram. In Ishq Wala Love we meet a domesticated Ranbir aka Ved. Deepika and Ved meet and go through the motions of falling in love but something is missing –And in one fell swoop Imtiaz skips Before Sunset and takes us straight into Before Midnight territory where the illusion of love comes crashing down.

Andar Ki Baat is Ranbir’s Vanprastha Ashram. As he slowly self-destructs first by displaying schizophrenic behaviour in business meetings and then an outright bipolar behaviour as he finally breaks the chains that are binding him.

With Don Returns Ranbir enters Sanyas Ashram with divine realisation upon him he finds his driving force and realises his true potential.

Imtiaz Ali is a master of parent child conflict and he has played on this from several angles starting with Jab We Met to Rockstar and now again with Tamasha. He treads a fine line of becoming too preachy and manages to strike a balance between the pent up angst that Ranbir feels as a child, as teenager and then as a young man and the reconciliation that finally happens when he finally opens up to his father. The opening sequence featuring a Tin-man Ranbir is a masterstroke. What may appear as jarring and out of place and narratively disjointed is reminiscent of the iconic Apple ad of 1984. There is a line towards the end of the movie which is dropped in very casually “the bipolar behaviour of the modern consumer” this is how you need to view the movie – the bipolar behaviour where you internalize your true desires and externalize what is socially expected and accepted. There is a constant struggle that every individual goes through and while it is heightened in case of some individuals like in the case of Ranbir here, I am sure everyone can find something to relate to.

Deepika Padukone just keeps getting better with every movie. Here she is brilliant in more of a supporting role to Ranbir, her rambling school girl moment when she runs into Ranbir the second time is so perfect that you feel her exhilaration and embarrassment at the same time. Ranbir Kapoor is perfectly cast as Ved, his restraint when he vents his frustration. His polite and proper Ved is just as meticulous then when he unravels and spirals out you see the dual personalities coming out and you see feel his struggle as the two Veds try to overpower one another. Seeing this side of Ranbir makes me yearn for him to an outright dark role he certainly has the chops for it. Like American Psycho or something on similar lines it would be Fan-freaking-tastic.

A R Rehman’s last collaboration with Ali was pure cinematic magic with Rockstar, here the songs are not that memorable nor easily hummable except perhaps Mattargashti and Heer is Sad but they are more lyrical and aid the progress of the story. S Ravi Varman’s work behind the camera isn’t as quirky and enticing as Barfi! But he brings a dark energy to when Ranbir is going through dark times, there is a lightness when he shoots the sequences in Corsica and then the scenes which are a parallel narrative with the Rickshaw driver who sees himself as a singer, the theatre scenes they have a Gasper Noe’s Enter the Void like psychedelic energy.

I really fail to see why this movie is getting mixed review or even negative ones. This for me rights the narrative wrongs of Rockstar where the female lead was poorly written. This is brilliantly acted and meticulously directed, in times of remakes and superstar vehicles where nothing other than the names on the playbill matter this is a movie that stands strong on its brave approach to storytelling.