The story begins with a solid intro into what will end up being the central plot of a daring rescue mission. Syria and Iraq are being taken over by ISC a caliphate organisation modelled after ISIL. The leader Abu Usman played by a sinister Sajjad Delafrooz is hurt and is taken to a hospital and the 25 Indian and 15 Pakistani nurses are taken hostages and the hospital turned into a virtual fortress and an ISC stronghold. The Indian embassy, foreign ministry and the intelligence machinery set into motion a plan to rescue the nurses – there is only one man for such a mission. Cue Tiger, to much whistling and hollering, Salman Khan makes his entrance and fairly quickly goes about pulling together a seemingly implausible mission with a sniper, a bomb expert and a senior citizen tech wiz.

The action sequences are adrenaline pumping and shot spectacularly. The introduction to Tiger as he fights off a pack of wolves is one of the best we’ve seen. Katrina is also not found lacking in the action department – the supermarket scene and the one in the city council merit admiration. The second half is one long action sequence of very little consequence with a fair bit of jingoism thrown into the mix to keep the audience hooked and hooting. The supporting cast is weak and an afterthought. This is a Salman Khan vehicle and each scene pays off in truckloads. The scene where he keeps “Highly Toxic Chemical Gas” at bay by simply covering his nose and mouth with his tshirt has the audience in raptures also serving quite well to allow salman to go bare chested – an act that he has perfected into art by now. Chuck Norris and Stalone’s Rambo got nothing on Tiger! 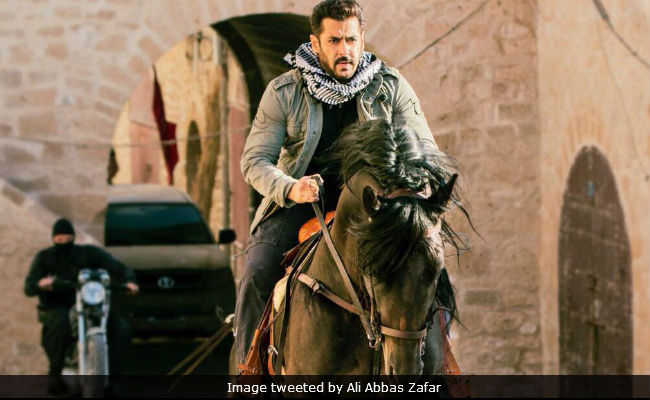 The plot which opens solidly becomes muddled with the introduction of Baghdadi- the ISC’s number 2 and the duplicitous American angle. Delafrooz manages to wrangle it back somewhat but by the time Tiger is shooting his machine gun the audience barely cares. This is what we came for and we get it in spades. Juvenile dialogues and a hammy Paresh Rawal dampen the pace a little but the action sequence and the set design/location scouting for the destroyed cities of Iraq and Syria are top notch and make the tension in the atmosphere palpable. The background score is effective for most parts but maudlin for the more forced-patriotic moments.

Seeing a Salman Khan movie in a theatre in Mumbai is truly an experience in itself. The crowd goes wild every time the director choses to frame the very impressive 50 year old in an action sequence that would put many youngsters to shame. Katrina barely gets a reaction and she is gorgeous in every single frame with that half open pout.

A solid opening sequence and a series of break neck action sequences and a total commitment from Salman make Tiger Zinda Hai worth a watch. Grab your popcorn and get to the nearest screen you can find with the most raucous crowd and go bhai-crazy.

Stephen Chbosky directs Julia Roberts, Owen Wilson, Jacob Tremblay and Izabela Vidovic in Chbosky’s second adaptation of a NewYork Times best seller in Wonder. Previously Chbosky directed his own novel “Perks of being a wallflower”.  Wonder is a novel by R.J Palacio.

The story of Wonder focuses on August “Auggie” Pullman, a 10-year old who’s been home-schooled by his mother Isabel played by Julia Roberts. Auggie is not like other 10-year olds he has facial deformities which cause people to stare at him and make cruel jokes. The story focuses on the first year at middle school where Auggie, where he crushes the science tests and makes new friends. Julia Roberts is wonderfully restrained as Isabel and Owen Wilson as Auggie’s father Nate is perfectly complementary as he brings a lightness to the proceedings. Izabela Vidovic as Auggie’s sister is also brilliant in her supporting role. Jacob Tremblay who blew the audiences away in 2016’s Room is beyond brilliant in this movie. You feel every emotion Auggie feels. You feel your eyes well up when the other kids are mean to Auggie and he retreats to his room and puts on his Astronaut helmet and you feel a catch in your throat when Auggie makes friends and experiences things that any normal 10-year old should. The other stand out for me is Noah Jupe who plays Jack Wills Auggie’s best friend – this kid is destined for stardom there is a natural ease about him and he lights up every scene he is in.

The thing that stood out for me with Chbosky’s Perks was the sensitivity with which he treated all his characters. Given that he was adapting his own novel you’d expect him to do a fantastic job. But it is testament to Chbosky’s commitment to telling organic authentic stories that he incorporates the small details that make the movie stand out. The moment Jack Will’s mom tells Jack about why it is important for him to take Auggie on the tour of the school is why R.J.Palacio wrote the novel in the first place. The story telling from the different points of views, the focus on kids more than the A-list adults and the natural ease with which the kids seem to come alive on screen is a rare gift. Most talented directs have a maxim – never work with kids and dogs. Chbosky is the exception he seems to extract the best out of the kids and also Daisy the dog. Every single scene delivers an emotional punch without being manipulative.

In an almost faultless movie the Miranda story seems a bit of a throw-away. It is a wonderful story arc no doubt – but what might have been greatly fleshed out in the novel itself seems a bit contrived and rushed on screen. But even this minor misstep is overcome by the conversation Miranda has with Auggie.

Do not miss this for anything in the world! In a world full of bad news this is 113 minutes of pure unadulterated joy and innocence. We all deserve a good cry once in a while, especially when they are tears of happiness.