Bryan Singer returns to the X-men universe to direct X-Men: Days of Future Past after having directed X-men and the X-men 2 and then handed over the reins to Brett Ratner who according to most nearly killed the franchise ( I had no such problems with The Last Stand though) . Armed the cast from the present-day X-men universe and the younger versions of the same characters introduced in Matthew Vaughn’s brilliant X-Men: First Class and with a crisp script by Simon Kinberg, Singer undoes a lot of the dead-end story arcs that Ratner took  with Last Stand.

The movie is set in the future where the mutants are under attack from an army of Mutant Machines dubbed The Sentinels invented by a man named Bolivar Trask played by the amazing Peter Dinklage. The Mutants must band together to time travel and stop the events that lead to these unbeatable machines from being made in the first place. Singer does not dwell on introducing the various mutants and their powers like Whedon does in the Avengers universe. We are thrown summarily in the midst of an ongoing battle with a Vegas-sized buffet of Mutants to choose from and are asked to go along for the ride as the mutants become familiar and their powers self-explanatory.  This is easily where Singer and Kinberg could have wasted precious minutes and possibly alienated a already super-hero-fatigued audience, instead they drop hints and several nods to those loyal to the franchise to know and get familiar with the universe. One scene in particular had me laugh out loud ( and probably be one of the first ones in the theatre I was in to react ) was that of Wolverine walking through a metal-detector.

Unlike the previous movies which focused primarily on Xavier and Magneto this one focuses more on Raven/Mystique. Jennifer Lawrence as the young Mystique is quite phenomenal; however a tad more humor on her part would have just been the most perfect thing ever.  Hugh Jackman gets the loudest reaction from the audience and deservedly so – he is the embodiment of Wolverine I cannot think of another actor playing him physically or physiologically. James McAvoy and Michael Fassbender once again prove why they are the perfect choice to take on the roles of Xavier and Magneto that Patrick Stewart and Sir Ian McKellen – the two stalwarts have made their own.

Newton Thomas Sigel mans the camera and does a fine job of transitioning between the apocalyptic future and the 70’s. the production design on these  big-budget apocalyptic movies are pretty standard but by straddling the 70’s John Myre faithfully recreates the era and actually does a better and more believable job than the X-Men : First Class. Of Particular note is John Ottman who dons two caps – those of being the editor and the music composer. As the editor Ottman does a fine job of chopping of whatever possible flab there was to deliver a concise and coherent story with a fairly consistent time-travel story arc. As the music composer he goes the route of Hans Zimmer with the big booming  sound pieces that have come to be the staple of the action/thriller genre. Not that it distracts from the action but nothing particularly original. 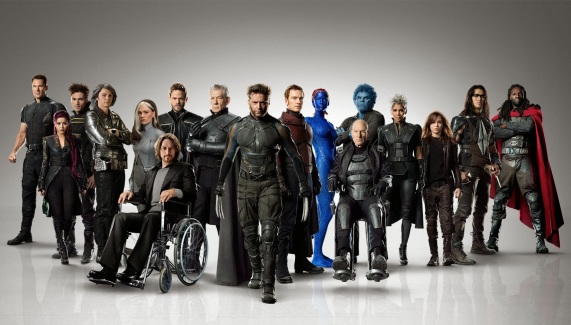 This is the super hero movie of the year! You cannot afford to miss it as every X-Men movie in itself is very good but this one while playing homage to all its predecessors manages to stand on its own and still chart a new path forward by undoing the ending of Last Stand. All the tenses get turned on their head as the has becomes had and the he gets becomes will he get? This is an intelligent movie which does not compromise on the entertainment aspect and still does not dumb it down for the audience.  Watch it as the Future and Past of the X-Men universe collide and result in a big bang that will rewrite where the series goes from here.