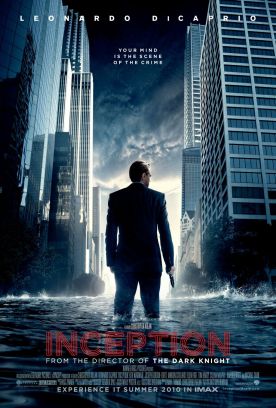 The anticipation for Inception was probably higher than what The Dark Knight faced. There were countless articles on the internet floating about and readying to cut Nolan down to size should this mammoth of a movie fail. Everyone on the net was buzzing “Does Inception face unrealistic expectations” “is it too intelligent for the transformers and twilight generation” – don’t even get me started on how we will be known as the twilight generation it’s just gross beyond belief, hopefully Nolan will help to turn that around. After all the man has an impeccable record, Memento and The Prestige are works of genius. Nolan could also be credited with single-handedly turning around the comic book genre with the batman movies.

As legend goes Nolan began “dreaming” up Inception around the same time he was finishing Memento. But Nolan wasn’t Nolan back then he couldn’t walk into Warner bros offices and demand a reported 160 million dollars to shoot a movie in 6 countries headlined by only 1 heavy weight Hollywood name. He let Inception ferment away for 10 years building away his reputation that die-hards like me have come to worship. Like I always say “In Nolan we Trust”. Then came The Dark knight, it brought him an almost fanatical fan base, critical acclaim and a few Oscars including one for supporting actor, a feat almost unheard of in the comic book genre. And more importantly it brought him over 1 billion in revenues just from cinema stubs. Warner was happy to part away with 160 mil just so that Nolan would agree to a third batman.

The story of Inception is complicated and simple at the same time. It’s a heist movie with the hero battling some personal daemons and this final job being his way out of this. Simple right? Well how he tells this story is where it gets complicated. It is a movie that the pop-corn association is going to want to boycott because it doesn’t allow you to be distracted for even a minute. The movie begins with Dom Cobb (di caprio) failing to steal an idea from Saito (Watanabe). Saito sets out to seek Cobb to offer him a job where instead of stealing an idea he would be implanting another into the mind of his rival – this is inception. The stealing and implanting of ideas is done via collective dreaming ( very noetic of Mr. Nolan). Cobb sets out to recruit a motley crew to help him achieve this feat, a feat he tried earlier and failed with disastrous consequences. I cannot delve any deeper into the story without giving out the exact specific details of the movie which could very well be wrong depending on which way you slice this movie. Also I don’t want to spoil the movie for those who haven’t seen it yet (come out from hibernation already!!)

Inception features a Nolan regular Hans zimmer turning in another brilliant soundtrack. Inception is a movie that can be discussed on so many levels. Even the soundtrack is not just there to tag along with the story, it works to add another level to this already densely layered movie. The Edith Piaf song “Non, Je Ne Regrette Rien” or no regrets in plain old English is used with varying degrees of speed to indicate which “dream level” one is watching. And for the conspiracy theorist me it begs the question was the choice of song just a co-incidence considering that Marion Cotillard who plays Dom Cobb’s wife won an Oscar playing the troubled singer.

The special effect work and blend in so perfectly with he world Nolan creates that it is nearly impossible to seperate the dream from the reality ( and the ending doesnt help in the slightest). Wally Pfisher who first collaborated with Nolan on Memento seems to have worked on the vision as long as Nolan has because it is impossible to tell who’s vision we are seeing Nolan’s or Pfisher. The worlds blend into each other from the fast paced chase sequence in Mombasa to the snow-clad final “level” it is one gigantic maze that nolan imagined and Pfisher translated on the screen.

The talented cast comprises of legendary Michael Caine and “The most underrated actor in Hollywood” Leonardo Di Caprio along with Ken Watanabe and another Nolan regular Cillian Murphy. It also features two of the best young actors Hollywood has to offer in forms of Joseph Gordon Levitt and Ellen Page. The movies best one liners come from Tom Hardy who is completely unrecognizable from his brilliant turn as Charles Bronson in a movie last year by the same last name. Marion Cotillard although present on screen for a very brief time goes from tragic to treacherous in a single breath and is beautiful as both. Each one of them turns in a performance worthy of Nolan’s direction.

Dreams are often a very fertile ground for any cinematic representation but more often than not these interpretation on screen leave the audience in flux and more confused than mesmerized – case in point David lynch’s Eraserhead. But Nolan overcomes that and more. This movie entertains entices and enthralls beyond any anticipation I held. Nolan Sir take a bow!! You have outdone yourself.

this is a reproduction of the note published on my facebook account on July 30, 2010 . Facebook seems to be loosing my notes and this is one of my favorite write ups so posting here.