Advait Chandan directs Zaira Wasim, Meher Vij, Raj Arjun & Aamir Khan in Secret Superstar. The movie tells the story of Insia Mallik the 15 year old girl from Baroda who aspires to be the best singer in the world.

Zaira Wasim plays Insia Mallik the eponymous Secret Superstar. Buoyed by her mother Najma, played by Meher Vij, Insia tries to escape an overbearing and violent tempered father through her music. Meher Vij is spectacular in the light hearted scenes with Insia, she is especially brilliant when playing the long suffering wife of Farook. Raj Arjun as Farook Mallik is one of the vilest characters I can recall and Arjun plays it to perfection. There is no redeeming factors to him and Raj Arjun brings to life the character of a wife-beating, chauvinistic, evil pig. Props to him for not holding back. 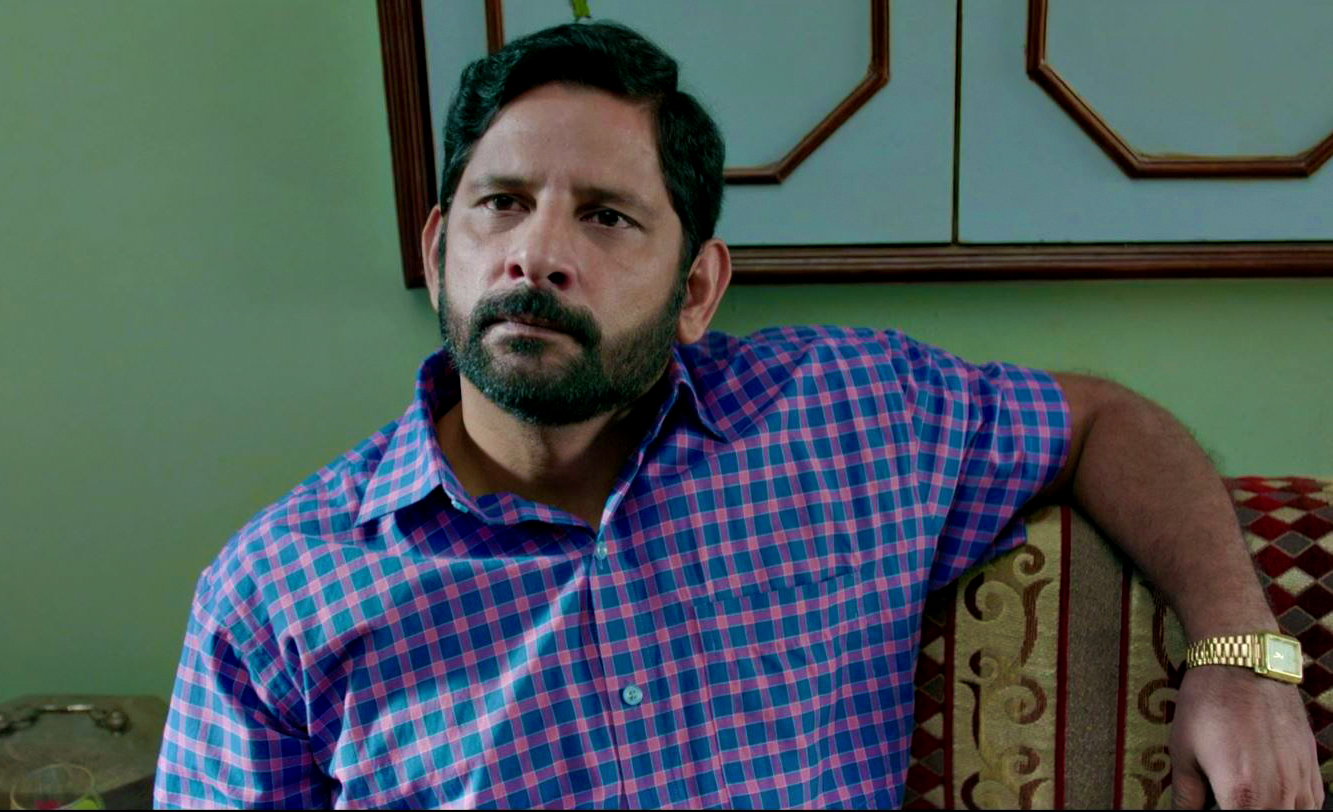 Najma is the one who bought Insia the guitar when she was six, Najma clobbers together money to buy Insia the laptop and internet connection and the reason she gives Insia really warms the cockles of my cold dead heart. There are many wonderful moments which lift the movie above the emotionally manipulative one. Several of those are also courtesy Insia’s puppy love Chintan Patel played by Tirth Sharma. Insia becomes an overnight youtube sensation when she uploads her first video dressed in a burqa. Insia’s brother Guddu played by Kabir Sheikh also adds a much needed innocence to the proceeding. Aamir Khan plays Shakti Kumar a disgraced Bollywood music director who has been boycotted by all the established singers. Aamir pushes the ham envelope with such abandon that the comparisons to Andaz Apna Apna are for once justified. Mr Perfectionist who has such a huge influence into every aspect of the movie making however is also its downfall in the most unfortunate of ways. In an effort at justifying more screen time for someone of Khan’s repute he gives away the biggest aha moment when he interprets his sleazy song as a romantic one as it was intended to be for Insia and then when she sings it just as she was instructed he lights up. It’s a moment that could have been such a departure for the sleazebag Shakti Kumar but it is squandered away by either incompetent writing or poor direction in trying to massage a superstar ego. The tangent about how his life and that of Insia have parallels is left unexplained. The whole shindig about his wife’s lawyer helping Insia is also unresolved.

Zaira Wasim who first burst onto screens with Khan’s Dangal is worthy of the praise she is garnering. She is a competent child actor. But there are range problems for me. There is almost a constant woe-is-me feel about her – there is no levity to her. There is a child-like wonder that is missing. Perhaps it is not her fault and it is the writing which stymies her into a one-dimensional character.

For a movie so heavily musically influenced the songs themselves are wonderfully childish. Meri Ammi is how a child would describe his or her own mother and feels wonderfully warm and enveloping – that Meher Vij is so great helps validate the song as well. Mein Kaun Hun is appropriately operatic. The direction by first timer Chandan feels very organic. The stictching up of the pinafore to hike up the neckline is so modestly middleclass it is almost a blink and miss, the use of aamir’s son’s name as the airline, and Guddu’s re-construction of the QWERTY keyboard as ABCD one is one of the most nuanced moments of the movie for me

The climax seems too obvious – the only thing missing was Shakti Kumar storming the stage ala Kanye West. There are many moments that feel like emotional manipulation and some dialogues feel too basic. The constant one character repeating what the other has said in the past also begins to grate and feel disingenuous. In spite of these short comings the movie is entertaining for most parts and Raj Arjun really livens it up for me. Not a bad 2.5 hours spent at the theatre.

R Balki directs Kareena Kapoor Khan and Arjun Kapoor in a gender-bender movie Ki & Ka aimed at breaking the stereotypes the society assigns to the male and female sexes especially when seen under the microscope of a martial setup.

We are introduced to Kabir played by Arjun Kapoor and Kia played by Kareena Kapoor Khan. After the meet-cute they start to get to know one another over cheap whiskey. Kia is ambitious and doesn’t want relationships and marriage to slow her career down. Kabir is chilled out and wants to be like his mother, a homemaker. He has no career aspirations.  Kia is a focused, ambitious career oriented girl who thinks that marriages are the death knell for women and their careers. They decide to get married out of convenience the story explores the strain of matrimony and daily life on their gender-swapped relationship. The premise couldn’t get more exciting, especially in today’s context where women are slowly chipping away at the glass ceilings and men are evolving from being cave dwellers.

But nearly every aspect of this movie is a nice idea taken to such an extreme that it becomes insufferable. Take Kabir’s fascination with trains for instance, Balki takes what is a wonderfully whimsical idiosyncrasy and dials it up to an 11. A tastefully kitschy apartment is turned into a train museum where food and drinks are served via toy trains, the wallpaper is a diagram of a steam engine and on and on and on. The idea that Kabir doesn’t want to be a part of the corporate rat race and is content to being a house husband is taken to the extreme where is hanging out with the other housewives from the building and hosting kitty parties and turning into a personal trainer to the kitty club to earn some money. Kia is no better. When she is not pointing at PowerPoint slides like one of those stock photos she is freaking out over a pregnancy scare by being horrible to Kabir, being insufferable when Kabir (unconvincingly and without preamble) feels jealous and neglected when Kia takes him along to a marketing conference in Dubai. What promised to be a refreshing look at modern day matrimony is essentially reverse-regressive where “the man” wears pretty blouses and “the woman” has a beard. From being progressively feminist where “Streeling Puling Same Thing” the movie veers into Femi-Nazi territory.

The dialogues are possibly some of the worst written and equally badly delivered from recent memory. The screenplay is choppy and the tête-à-tête between Kabir and Kia is so disjointed you as an audience cannot feel for either of the characters. Kareena looks radiant and is styled to perfection but her overreactions which were charming in Jab We Met are just plain clumsy here. She is unconvincing as the career obsessed Kia and comes off as someone going through the motions. She is good in parts where her interactions with Arjun Kapoor aren’t forced into the reverse stereotype. Arjun Kapoor is totally lacking in charm and wit and is forced into poorly conceptualised role that is at odds with his masculinity. He lacks a certain sense of self-assurity which is required to carry off a role which would be subjected to snide comments as it challenges the social norms. Instead all we get is pan-faced expression. His outburst at an off-hand comment Kareena makes about stay-at-home wives is as unconvincing as Kareena’s outburst at his allegations of her wanting to sleep with an executive from New York to further her career. The supporting characters are also poorly written. Swaroop Sampat and Rajit Kapoor from the golden age of Indian television series like Yeh Jo Hai Zindagi and Byomkesh Bakshi respectively are given the most cringe inducing scenes. The first time we need Swaroop Sampat she hams it up and then advises her daughter Kia to consider pre-marital sex. Rajit Kapoor does one better when he tells his son if he should look down his boxers in case he has forgotten he is a man when his son Kabir tells him of his plans to get married to Kia and live as a house husband. I hate it when movies do product placement and Ki and Ka is a essentially a long and pointless vehicle to push as many products as they possibly can and when it all finishes they still manage to push Virgin trains through. This is just in poor taste.

This could have been a milestone movie for furthering the cause of gender equality had it been dealt with in a more nuanced fashion. Simply swapping stereotypes doesn’t break them. The same basic premise without the forced strife at one another’s growth, a little more compassion from both characters and the movie would have greatly benefited. The man content at not being a corporate rat finds success as a domestic-god, the woman a cut-throat corporate ladder climber who doesn’t taunt her husband for his lack of ambition. At the end two people in a marriage who thrive in the choices they made for themselves and who basked in each other’s company. Wouldn’t that be a story you’d want to watch? Well in the immortal words of John Lennon: